Hey guys, I need some help Re a sourcing an electrical fault in my car thats sending many other components into a frenzy.

I think it maybe a grounding fault of some sort but locating it is becoming a night mare.

I want to ask if anyone has a complete list of any/all modules in the gto gen 1 (1992 if it helps) jap import and or a full body harness wiring diagram?

The car does crazy things when certain buttons are pressed, example, when fog light is pressed the ECS module seems to lose power and resets itself.

When the side lights are switched on the interior lights sometimes aim and the air cod panel goes off.

If the cruise control button is pressed the abs flickers, the overheated cat light shows and the dash buzzes.

All the buttons so far (at least thst I’m aware of, including all those mentioned in my examples ) have been fully reconditioned/refurbished and confirmed working with multimeter as they should.

That sounds like a tricky one to diagnose. Don’t suppose the electrical manuals here are what you’re looking for: Manuals - Stealth + 3000GT / GTO

Have there been done many mods to the stereo, speakers, amplifiers and such in your car??? Those things can cause havoc if not done properly…

If not, then you just gotta go the long route and checking every fuse, module and so on…

There’s no sound system in the car, but Re checking modules thst was my question

Maybe a long shot but try to disconnect the ECS module. When faulty it has been known to cause some electrical issues…

I think it would be easier t find the holy grail than to find the miracle diagram that will give you a simple answer to this problem without you having a good knowledge of electronics.
Here are some things that you need to think about.

I’m generally speaking fairly knowledgeable on car electrical systems so fortunate enough to have the ability.

I’ve slowly been taking the car back to standard after some botched wiring from a previous owner.

1, the car was bought as a barn find, so I know little history on the car, the faults are all presant when I purchased the car

2, thank you, the video may help as I’ve already had to repair several modules with corison and even one that was shorting out due to cap leakage, so your video would really be helpful so thank you

3, battery is charged and is connected to an industrial grade battery charger capable of several hundred amps and smart monitoring.

4, yes this was the first thing I did

5, the earth’s are somthing I feel maybe part of the problem and was part of hoping to answer my question regarding where all earth strapsay be (including in a possible wiring diagram)

6, I believe you’re right, but since I’m undoing a previous owners bodge ti don’t know what’s been done and is now on me to restore it

Once again thank you for all help!

Just an additional note, the thing I’ve found with this cars is thst most systems are independent of each other unlike modern cars, ie my power fold will operate independently, as will the ECS, the pop up lights etc.

But the part thsts strange is thst these cars lack a canbus system yet several systems seem to be causing faults with other systems.

sounds more like a bad earth problem to me. I recall a bad earth on an old car on the rear lights. The earth was bad so the volts found another route ie through something else which shared the same earth point Thanks for that! I do also think it’s either a bad ground or possibly a short, those photos help thanks!

There’s tons of circuit diagram pics in my book but it’s hundreds of pages.

May I ask where you purchased this book please?

It’s the 1992 electrical tech book. The original owner had it with the car. 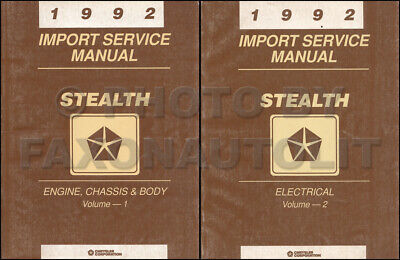 This original manual is the same one used by Dodge dealer mechanics to service the Dodge Stealth. This issue of the manual is a two volume set. The first manual covers engine, chassis, and body; the second manual covers electrical only. In the first...

thank you! very much for that

Thank you!!
I had a good look through it seems that the LHD grounding locations are not all the same as RHD (and not mirrored either)