I have a stock (I think) '94 VR4 that I purchased a few months ago. The newly installed fuel pump is not kicking on (neither was the old one - hence the replacement). At the fuel pump there is a connector that connects the pump to the car side. From what I have read so far, the wire on the car side that carries the power (11’ish volts) is the black/blue stripe wire. When I put the meter on mine, it is the yellow/blue wire that is hot. Is this normal? I can change the wiring on the pump to match or hotwire, but if that is different, how do I know which wires are going to the gage, warning light etc.? Thanks

This might be useful when diagnosing a fuel pump issue (was for me anyway). There’s a connector between the battery and bulkhead that you can use to supply 12v to the fuel pump. With the battery connected but the ignition off, use a spare piece of wire to connect the positive battery terminal to the black connector and listen out for the fuel pump and fuel passing through the lines/rail. 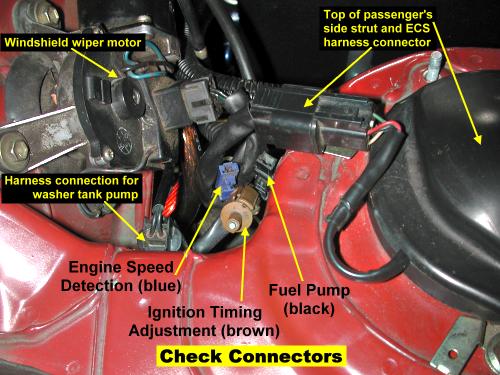 When I was testing mine, I discovered that the fuel pump doesn’t prime when the electrics are switched on (key in “ON” position) like in a lot of more modern cars. The fuel pump only runs when cranking or when the engine is running (or by forcing it to run using the method above).

I got it fixed! - After further testing, the pump I purchased was DOA. They sent me out a new one and the car fired up. First time it has ran in 6-7 years. Anyway, thanks for the suggestion, that is a handy bit of knowledge.