What to do with "Dead" ECU? When I bought my late model 1992 GTO VR4 it came with two ECUs. I was told that one of them was dead. I put the alive one in the car and started it (I did not leave it running for long because the engine had awful rod-knock) and there were no problems. It has been about a year since then, and today I opened up the “dead” one to see if there was anything visually wrong with it. (like the leaky caps) I noticed some “interesting” modifications that I will show in some pictures.

So my questions are:
-Is there something I can do to find out if this ECU is repairable?
-Is it worth trying to repair this ECU? I understand they don’t make these parts anymore, so maybe if it was fixable I could sell it.

It seems that circuit tracks where damaged with previous leaking caps and somebody make bridges with the cable to solve the problem.
Maybe it is reparable, I think it worth to resolder the problematic caps again and check the continuity of the circuit tracks around the caps.
It is easy and cheap.

Yesterday I finally decided to pull out and open the ECU that was running on my 2nd Gen VR4. Even with no clear fault from the module, I was concerned about those capacitors. That’s what I found while inspecting. 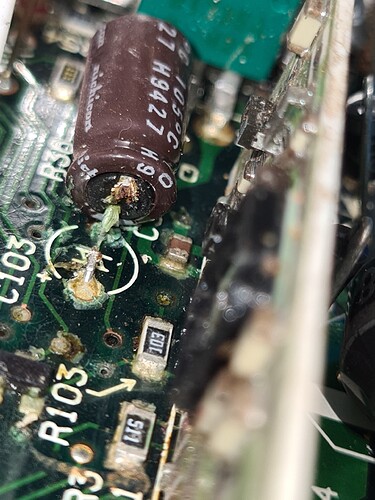 Once I had done several capacitor replacement in the 1st Gen in several modules, I had enough capacitors to replace the three of them.

I can’t remember now the values from the 1st Gen, but those are the ones you will use for 2nd.

22uFx50V
47uFx50V
100uFx25V (could be 16V, but for this purposes 25 is better, since technology reduces the size along the years).
While looking for leaking capacitors, I used a magnifier with a good light, you can gently wiggle the capacitors, to see underneath better, while doing it, one of them just detach the body from the terminal, revealing no longer connected to the circuit, as per the picture above.
I recomend replacing, but you might be aware of handling this procedure quite well, because you could damage the board. If you had no experience, it’s better taking to a good technician and just tell him what to replace.

Thank you, I will have another look.