Engine dies without warnings while driving

Just like the objects says, I’m having this problem since a couple of days.
Suddenly while driving, the engine dies. I have no symptoms before it happens, last time I had it is a couple of hours ago, I was driving in downhill with my feet out of the throttle and when I went back on the gas nothing happened.
I had to stop, shut off the cluster, got the key out for a couple of seconds, then started the car again and she lived again. I had no other issues for the rest of time while driving back home.

Some time ago (2 years like) I had to replace a wire to the fuel pump because it snapped, now I’m guessing that the fuel pump is going bad.
Some friends told me to try to replace the PTU (I’ll do it anyway because very likely has 30 years).

My car is a 1gen UK/EU model with 182k km.
Any other suggestion?

I have a '93 VR4 - about 3 years back was running great and then just shut down. Had to coast to the side. It was leaky capacitors in the ECU. Apparently that was an issue with first gens. Sent the ECU in, they replaced the leaky caps and it’s been perfect ever since. Good luck!

Thanks for the input, I just saw a video and now I know how to remove it.
Are your symptoms like mine? Because when I power off and on the cluster she starts and runs great. As I said before I got no signs of misfiring or similar. Just stalled while driving.

I’ve been adviced to buy new crank and cam sensor, because it happens to be related as well to my problem.

I’ll let you know what the problem is, hopefully soon enough.

Sure. It’s been awhile, but I don’t recall ECU removal being too difficult. I just had to keep good track of everything I disconnected to get to it. Lotsa pics. I found it’s good to be kinda OCD with these projects.

Yes, mine just stopped dead out of the blue. Stalled while driving. Running great one sec., then everything went off. Had to have it towed home. Took me a bit of poking around 'til I figured the leaky capacitors on the ECU were the culprit. Then I just looked online and sent it out to have it done.

I tend to think of these cars like a jigsaw puzzle I take apart in the Winter to fix stuff. And if I’m lucky, everything goes back the way it should by Spring and then I get to drive hard 'till next snowfall.

I see, thanks for all the info.
You described perfectly what happened to me, but I was lucky enough to start her back and bring her back home.
I’ll remove the ECU and inspect it (and change the capacitors anyway).

I’ll keep you updated and if it goes all well, I’ll change the crank/cam sensor next time I’ll do the timing belt.

Hello again,
that’s what I found.

The ECU seems fine but I’ll change the capacitor anyway.
The back of the ecu was all sticky, don’t know if it is meant to be like that, for now I cleaned it with contact cleaner. 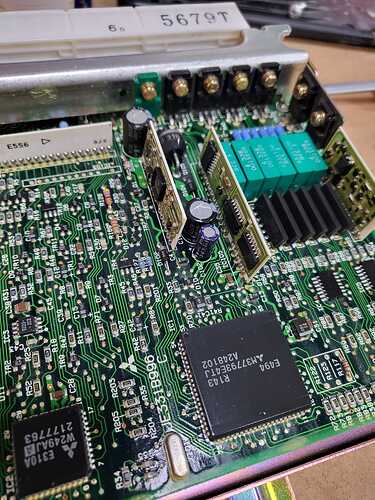 But this is worth sharing, it seems the harness of knock sensor that is damaged. I can’t say if it is related to my problem. 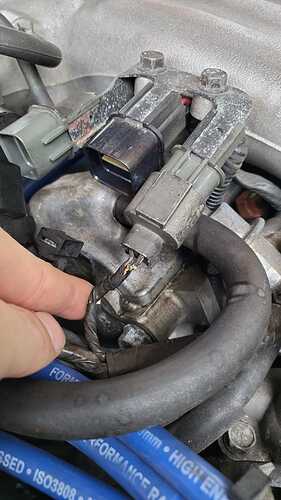 I’ll let you know when I’ll address these problem if it worked.

Hi there, I have the same issue with my 94 Stealth RT. Mine started out just like yours and it progressively got worse. Now I am by no means a mechanic but through these types of forums I learned that the Crank Angle Position Sensor could be the issue. Like mentioned I’m not a mechanic and tried to replace it myself. Got all the way to the sensor and broke both bolts holding the sensor.
Now they have to either extract the 2 broken bolts or replace the oil pump that the sensor is attached to which my be the better option. Before I got to this point I changed the PTU, fuel filter, fuel pump relay (MFI), and the fuel pressure regulator. None stopped the issue. When talking to my shop they asked if it stalled after getting hot, which it did, so I’m pretty sure that the Crank Angle Position sensor is the issue. Good luck to you, and I’ll repost as soon as mine is out of the shop which should be any sec, min, day or week.

Hello, thanks for sharing your experience.
I thought that it could be the CPS so I bought a spare, I’d prefer to change it next year with the timing components, I’m not feeling quite safe of disassemble the belt/tensioner and not replace them.
By now I have some personal problems so I can’t bring the car to my shop.

I’ll keep you updated.
Thanks again